Knowledge is a funny thing. If you ask philosophers they’ll tell you that it takes three things to “know” something:

Someone who has a fear of heights can read the statistics about airline safety (reason) and sees that it is objectively safer than driving (it’s right) but they don’t believe it in their gut.

Another person might have a “system” for playing the lottery. They’re convinced it’s going to pay off (belief) and maybe it actually does (they were right) but there was no rational explanation.

A third person can go on a low-fat diet that they’re sure will work (belief) because they’ve read the My Plate guidelines from the USDA (reason) but they gain weight anyway.

That’s a lot of “knowing”

So what does this have to do with food and fitness? Read some diet blogs online and you’ll think you traveled back in time to the middle of the Inquisition. (And nobody expects that.)

I mostly follow paleo-focused blogs, but I’m betting it’s the same on the vegan ones. People get really specific about what’s “allowed” and what’s “not allowed” on paleo, and get really offended when someone disagrees with their interpretation of “the rules”.

The question is usually, “Is this paleo?” But what it means is, “Can I eat this?”

Dude, we’re omnivores. We’ve got sharp, pointy teeth up front for tearing into meat and wide, flat ones in the back for grinding harder stuff. We’ve got a really long digestive tract for extracting as much as we can from whatever we put into it. We’re a little choosier than goats, but not by much.

What I’m saying is …

Yeah, you probably can eat it

That’s doesn’t mean you should.

Paleo isn’t a law, like a speed limit that you have to obey because it’s the law. It’s more like the law of gravity, a description of how things are whether anyone likes it or not.

And “how things are” is that we’re still built just like primitive man, who learned through trial and error what was good to eat. When your errors are fatal, your family tends to remember to avoid those red berries with the yellow spots.

Where some people go wrong is in thinking that just because something never was, that it never should be. “Cavemen never ate cheese!” Well, okay. But if they had would it have been bad for them? “Cavemen never ate potatoes!” No, but … okay you know what? Cavemen never took aspirin, either. Or penicillin. Or any of a thousand vaccines that have wiped out countless deadly diseases.

The point is, paleo is pretty good at telling you what you probably should eat. It’s not as good at ruling out things you shouldn’t eat. 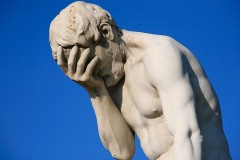 I want to appreciate when someone gets it right, I really do. But when they follow up the rightness with a healthy scoop of FAIL … well, thanks for nothing, guys.
END_OF_DOCUMENT_TOKEN_TO_BE_REPLACED

Once upon a time we all knew the Earth was flat.

Once upon a time we all knew disease was caused by “bad humours”.

Today we all know that the way to lose weight is to eat less and exercise.

Like the headline says on the original, “The bun is the least healthy part of a hot dog, right?”

Yup, so I like this solution. Hot dog wrapped in bacon, grilled and served inside another grilled hot dog. Genius. Except for one thing …
END_OF_DOCUMENT_TOKEN_TO_BE_REPLACED 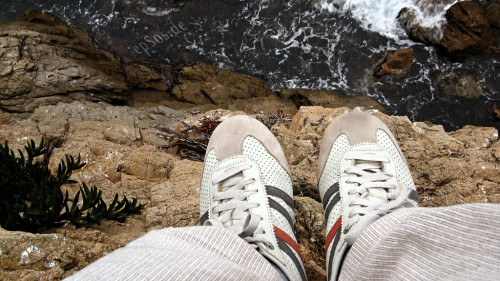 The American Heart Association recommends that you, “Aim to eat less than 1,500 mg of sodium per day.” It’s in bold on their site.

Apparently they want you to die. Because the American Journal of Hypertension reports that:

In other words yes, high sodium intake leads to increased risk of death. But so does low sodium intake! Did you doctor tell you that?

How low is low?

Ahh, good question. Because of course “high” and “low” depend on who you ask. Let’s put some numbers to this thing.

The various studies all measure in millimoles, or mmol. Unless you’re taking a chemistry exam you don’t need to know how to calculate that, just that the conversion from mmol to mg is: 1 mmol sodium = 23 mg sodium

That means the AHA recommendation is that you limit your daily intake to about 65mmol of salt per day. But the AJH study classifies “low intake” as anything under 115 mmol.

I don’t call this a paleo blog for the same reason I don’t claim to “eat paleo”: I’m not a good rule follower.

If you’ve been on the internet for more than three minutes you’ve already learned that people will argue about anything. And some people put the most energy into fighting people who almost agree with them.

I’m one of those people who almost agrees with paleo, but I’m not strict about it. Here’s why.
END_OF_DOCUMENT_TOKEN_TO_BE_REPLACED 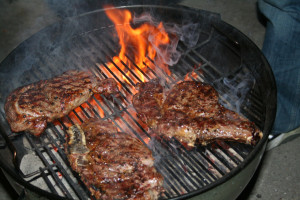 Two new studies conclude that low protein intake may hold the key to a long and healthy life, at least until old age.

How’s that? Low protein is good for a long life, until I’m actually old. Can you explain that?

Another key finding is the suggestion that while a high-protein diet may in the short term help people lose weight and body fat, in the long term it may harm health and reduce lifespan.

So eating lots of protein will help me lose weight and body fat, which everyone is telling me I should do. But if I keep eating that way it will kill me when I get old?

He and his colleagues showed that high protein consumption is linked to increased risk of cancer, diabetes and death in middle-aged adults, although this was not the case for older adults who may benefit from moderate protein consumption.

Well now they’re not even getting their story straight.

The study they’re reporting on actually showed that a high-protein diet was “bad” for you from age 50-65, after which it was “good” for you. Which is a brain-bender already, but then they get the good/bad backwards the first two times they mention it, and lead with a headline that only mentions half the conclusion anyway.

Click here for a fuller analysis of what’s wrong with this study. 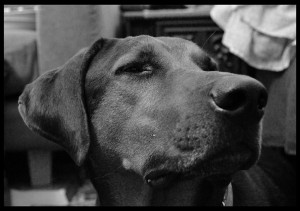 But wait a second … what if I’m talking about what temperature to bake a cake? Well than that’s not nearly hot enough.

Depends on who you ask

The thing about qualitative words like “hot” or “cold”, “high” or “low”, is that they’re all relative, and all subject to interpretation. That doesn’t make them bad words, or mean that we shouldn’t use them. We just need to understand what they’re telling us.

For instance when a study talks about the results of a “high protein diet”, what do they mean by “high”? In one example the cut-off for “high protein” was 20% of daily calories from protein. If you work out regularly and follow common nutritional guidance, you’ll think that number is pretty low.

A common pattern in observational studies is that they start with the data and ask themselves, “How could we group the subjects so that one group is statistically different from another group?” Nothing wrong with that, it’s how we find unexpected patterns.

But when the top of your range ends up towards the middle or bottom of what you’d find in a general population, you’d better be really careful about calling it “high”.

Unless you majored in math or finance, odds are your formal education in statistics started and ended with the definitions of mean, median and mode somewhere in junior high. So it shouldn’t be surprising that most people are really bad at evaluating statistics from studies written for academic journals.

That includes the people who write the stories reporting those studies to the rest of us.
END_OF_DOCUMENT_TOKEN_TO_BE_REPLACED

You know what’s even worse than spending six months of your life crunching statistics on human mortality? Getting your study picked up by the national press and nobody reads it because you called it “Low Protein Intake Is Associated with a Major Reduction in IGF-1, Cancer, and Overall Mortality in the 65 and Younger but Not Older Population“.

Mass Media to the rescue

Ignore most of the statistics, find one that can be massaged a little bit, and presto! All of a sudden you’ve got “Too much protein in middle age ‘as bad as smoking’.”

Except that’s not really what your study said. It said in some groups there is a statistical correlation between reported protein intake and mortality … assuming the self-reporting is accurate … and allowing for the fact that the definition of “high” vs. “low” protein was defined after-the-fact … and ignoring that the correlation went in the opposite direction for half the study population.

It doesn’t even matter if you say right in the summary that this only points to interesting questions that must be verified in a prospective study. Most reporters don’t know what that is. But they know what will get people to read their story.