I don’t call this a paleo blog for the same reason I don’t claim to “eat paleo”: I’m not a good rule follower.

If you’ve been on the internet for more than three minutes you’ve already learned that people will argue about anything. And some people put the most energy into fighting people who almost agree with them.

I’m one of those people who almost agrees with paleo, but I’m not strict about it. Here’s why.

Think about why paleo works

First, a quick-and-dirty definition of what paleo means:

Man evolved over millions of years. We’re biologically nearly identical to man as he existed 40,000 years ago. In the last 10,000 years — since the creation of agriculture — the food we eat has changed drastically, faster than man could adapt.

As a result, lots of people don’t deal well with lots of the common industrial food products we tend to eat. If instead we eat what cavemen ate, we’d be eating the foods we evolved to eat.

As a rule of thumb, this works great. Take it too far and you end up rejecting some really good stuff.

The best way I’ve seen to think about this is The Framework of Common Sense by Anastasia at primalmeded. The idea is that when evaluating a food you think first about the most important things before worrying about the less important. And the three main things to think about — in order of importance — are:

Some examples (Don’t read before dinner)

I could go on all day, showing how different foods stack up against these three tests, but my point today is that all of paleo theory falls into just Step 2 of her framework.

Let me sum up 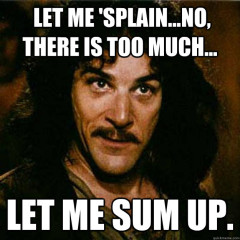 If we’ve been eating it since before agriculture existed, and it hasn’t killed us yet, it’s good for you.

Otherwise, it might be good for you … but you’ll need to do some research.

I loved the â€œbad boyfriendâ€ idea of dieting, and I really wish people would pay less attention to how they look and how â€œbadâ€ they are.
Mel