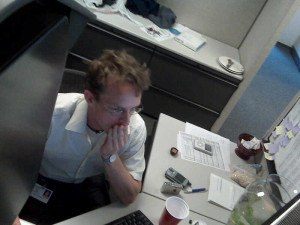 Seems like a simple question, right? But when you’re talking about observational studies what they’re really asking is, “Why did that happen?” And that’s much harder.

What is an “observational study”?

When researchers look at something that happened without their input and analyze it, they’re observing something. This is different from a “randomized controlled trial” [RCT] where they design and conduct an experiment, knowing in advance what they’re going to be looking for.

What observational studies are great at is finding interesting and unexpected patterns in really large populations. For instance they might find that people with a certain gene are more likely to have a particular disease. Some of these patterns aren’t even noticeable until you’re looking at a really large group of people, and do you have any idea what it would cost to do a 20-year experiment with a million subjects?

What they’re not good at is proving why those patterns exist. And by “not good” I mean they can not ever prove the “why”.

I just blew your mind, didn’t I?

Of course not, we all know fire causes smoke.

How about this one: Where there’s obesity there’s diabetes. Did I prove obesity causes diabetes? Or maybe diabetes causes obesity? Or is there something else — like eating a ton of sugar — that causes both obesity and diabetes?

This flaw is commonly described as correlation is not causation.

Observational studies are useful for finding good questions. Then you need to do an RCT to answer the questions.

NOTE: If you see something reported as “epidemiology” or an “epidemiological study” they are talking about an observational study.

Trying to starve oneâ€™s self only to bounce back plus some, is no way to live.
Edith Kehoe