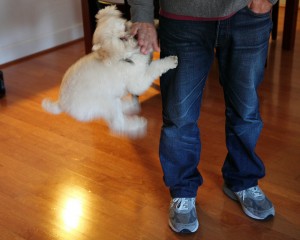 Photo by Mr. T in DC

Our dog, Bean, is about a year-and-a-half old. She still acts like a puppy, which is usually just fine. It used to be cute when she’d jump up on visitors at the front door (That’s not her up above, click here to see a picture of Bean.) but now she’s much bigger and we needed to stop the jumping.

Fortunately I know how to train a dog to not jump up. It starts with the idea that dogs don’t really understand the idea of “No”. The problem with “No” is that it’s an abstract concept.

Imagine having a conversation with your dog

No, “No” doesn’t mean “Sit”. It means for you to not do whatever you were doing. — Now you’re just screwing with me.

Jeff Dunham nailed this when talking about his wife’s chihuahua.

[There’s a video embedded in this post. If you don’t see it, come view it on the blog.]

If you don’t want to watch the first minute or so of that, here’s what he said about his wife’s dog:

I figured out size does matter in the canine brain. Bill — golden retriever — very smart animal. When he was a puppy and I had to potty train him, if he pooped on the living room carpet, I stuck his nose in it. Three time later, he figured out “Oh, I am not supposed to crap here!” Next two dogs, the same thing.

Now the little brain-dead Chihuahua comes along. She poops on the living room carpet, I stick her nose in it; three times later she thinks, “Oh, I am not supposed to crap ever!” … And that’s why they shake.

You know who’s even worse at “No” than dogs? People. We understand what it means, we just don’t like doing it. We suck at “No”.

Remember when you were little and your parents told you not to punch your brother? And 20 seconds later he was crying?

But mom, I didn’t punch him. I kicked him.

When we’re determined to do something bad, “No” just means go do something else that’s bad. You can’t possibly create rules prohibiting everything not-good.

So look back at that conversation with your dog. See the one line where the dog thinks you’re making sense? It’s when you tell him to sit down when people come to the door. That isn’t “No”, it’s “Do this instead”.

That’s the key: Do something else instead

When you want a “treat”, you might think of donuts. Your adult brain knows you shouldn’t have it, but the 7-year-old voice wants its treat now! Just telling yourself “No” doesn’t work. It’s like telling the dog not to jump up.

But I started telling Bean she had to sit when I come in the door, and she doesn’t get any attention until she does. She stopped jumping up. Trainers call this “alternative behavior training”. Don’t just tell her “No”, give her an alternative behavior instead, one that is incompatible with the bad behavior. You can’t jump up while you’re sitting down. (Unless you can, in which case I want to see video of that.)

I was telling someone about that yesterday and realized it’s exactly the same way I’ve trained myself not to eat carbs during the week. For breakfast I eat steak and eggs instead of cereal. For lunch it’s a burrito bowl with beans instead of rice. At dinner I’ll have roasted cauliflower instead of a potato.

Am I saying to train yourself like a dog?

I stopped worrying about bacon and ate it whenever I wanted to. I like bacon, but Iâ€™m not a freak about it, so we are talking 2-3 slices for breakfast 2-4 times a week.