Tell me I can’t have something and suddenly I want it. It’s stupid and childish, but it’s hard-wired into us to want what we can’t have. Maybe you’ve outgrown that, but I’m guessing — if you’re honest with yourself — you don’t like hearing, “No, you can’t.”

There is a charm about the forbidden that makes it unspeakably desirable.
Mark Twain

But that’s exactly what most diets are all about. There’s more books every year telling you what you can’t eat.

How’s that been working for us?

Telling people to “just say no” isn’t helping. As a species we don’t seem to be really good at this whole willpower thing. What I’m saying is, It. Doesn’t. Work.

And after each failure we feel like it’s our fault. Great … now I’m fat and depressed.

The problem starts when you focus on the result. You figure that’s what you want. The diet you’re trying to follow? You’re not really committed to eating that way; it’s just what you need to do until you reach your result. And that’s where you’re screwed.

Negotiating with your inner 5-year-old

Try going on a diet and you’ll come face-to-face with your inner child in full-on tantrum mode.

No. I don’t wanna. You can’t make me. WAAAAAAAAHHHHHHH!!!!

Parents cope with this in a couple of ways, usually coming down to threats, bribery, appeasement or manipulation persuasion. If you haven’t already guessed where this is going, that’s exactly what we do when we try to talk ourselves into something we’re not really committed to.

Tell yourself to just suck it up already … quit whining and get with the program. Go ahead, try it. I’ll wait …

You’re back? Okay, here’s the right way to deal with childish impulses. (Free bonus: Also works on actual children.) You don’t say, “No”, you offer them something better and say, “Here, have this instead.”

Look at most of the books about persuasion and you’ll see this same advice. Don’t fight with people, find a solution that works for both of you. And since I’m all about persuasion, I don’t believe in no-you-can’t. I believe in something better instead:

Once you develop the habit of eating better, you’ll wonder why you ever liked the junk so much.

Oh sure, just create a new habit. Like that’s easy.

Willpower is the art of replacing one habit for another.
Michael Garofalo

Lucky for me the habit that I want to develop isn’t some strange, unusual thing. It’s a pretty old habit, actually, but one we’ve gotten away from.

Our great-grandparents weren’t fat. They didn’t have diabetes. And no, it’s not because they all died in their 40s. It’s because they ate differently from the way we do.

It’s hard to see what’s in front of your face.

I spent three years writing How To Cook Like Your Grandmother before I realized I was missing a key point. Sure, all of my recipes were exactly like you’d see in your grandmother’s kitchen. It’s the menu planning that I was getting wrong.

Once upon a time, cakes and pies were for special occasions. Sweets were a rare treat. If someone did need to lose weight, they cut out bread and potatoes. And it worked.

I was that close to a way of eating that would correct my weight, and I didn’t even realize it. So I took the last few steps … and started dropping a couple of pounds a week. I got on the right side of 200 pounds for the first time in a decade.

Without hunger, without bland food, without willpower.

Are you ready for a change?

If you’re happy with your weight, that’s great. Go check out the hundreds of recipes on my other site. The brownies are outstanding.

Then you’re ready to look beyond a numeric goal and commit to eating better for its own sake. The fact that it fixes your weight is just a bonus.

You can spend three years thinking about things, like I did. Or skip all that research, trial and error and just let me show you what works. Join the No Willpower Crew and not only will I show you everything I’ve learned, I’ll tell you what worked best for me and what might work better for you.

Here’s how I’ll get you started.

Don’t worry, you won’t scare your friends away.

People with really strict diets have it hard going out to eat. And if they do go out, they end up placing special orders that would make Donald Trump blush.

I never have that problem. First, because nearly every restaurant I’ve ever been to has plenty on the menu that I’ll eat every day. And for the rest, I just wait for the weekend. All bets are off come Saturday, so most of my friends don’t even notice I’ve changed how I eat.

Try it for three months risk-free.

My wife once stuck to a diet plan for four months, convinced that if it wasn’t working it was her fault. (I won’t name names, but they charge a dollar per pound you want to lose … plus hundreds a month for food you buy from them.) For four months she couldn’t eat a meal without feeling guilty.

My father was following the same basic (low-fat) plan for years without any progress. And since Mom wasn’t about to make two meals every night, that means she’s been on the same diet as him. Yay for collateral damage.

All I’m asking for is three months. You can do anything you set your mind to for three months. That’s plenty of time to decide if it’s worth it. If not, I’ll give you a full refund. 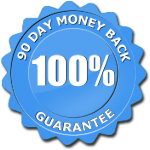 I won’t even ask for before-and-after pictures to prove it didn’t work for you. If you want to lose 60 pounds and only lose 57, and you want to say that’s my fault so you can feel better about yourself? Go ahead, be that guy. I’ll give you a refund anyway.

(Then I’ll talk about you in the forum. You won’t care though, because you won’t be there any more.)

Did I mention the private forum?

Yeah, that’s The Meathead meetup. Check your willpower at the door. Share recipes, ask questions, give and get encouragement, meet other people in your area.

Nothing makes it easier to resist temptation than a proper bringing-up, a sound set of values — and witnesses.Franklin P. Jones

You’ll get exclusive content, offers and freebies by email. First crack at any limited offers before they go on the blog. Free downloads not available anywhere else.

One more time, from the top.

What are you waiting for?