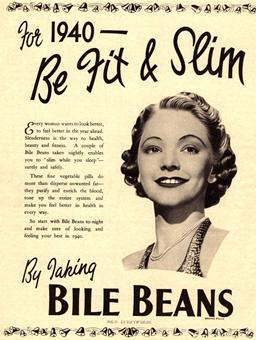 Image from The Advertising Archives

When I started this blog I asked what you don’t like about diets. The results have been remarkably consistent right from the beginning:

Which is funny, because if it’s not working why would you want to stick to it?

Darya Pino over at Summer Tomato made most of the same points plus a few more when she explained 10 Reasons Dieting Is Idiotic. She also pointed out that dieting screws up your thinking about food. You start seeing food as the enemy, instead of an enjoyable part of life.

This is not new

The Library of Congress hosted a show of old diet books that prove people have been worried about their weight for a long time. And hucksters have been willing to sell them bogus remedies for as long as there have been printed ads.

It’s easy to laugh at this stuff today, but stay up late some night and watch the infomercials. Wall-to-wall silver bullets promising to take the weight off without any effort, and you won’t even have to change how you eat.

I’d like to believe humanity gets smarter as each generation learns from the one before, but seeing how we’re still making the same mistakes about things as basic as how to eat well is not making me very optimistic.

I love the one where you eat a high-fiber biscuit that’s supposed to fill your stomach so you feel full. I guess no one told the doctor who endorsed it that the feeling of satiety is primarily based on hormones, not on the sheer volume of food.