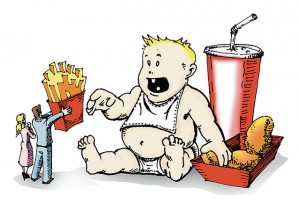 I’ve heard a few discussions lately from parents worried about their children’s weight. Opinions ran from putting the kids “on a diet” — which I’ve already said is a bad idea for anyone — to the idea that even discussing weight with a child is a recipe for eating disorders.

I can see both points of view, and have an opinion of my own, but I want to know what you think. Take a minute to answer the question below. Even if one of the answers is pretty close to perfect for you, please don’t hesitate to say more in a comment afterward.

I’m on the beginnings of a low carb journey myself, and I’m trying not to pay much attention to calories in and out this time around. It doesn’t seem to be hurting anything…
Lisa Greer