No, that doesn’t mean if you have a weight problem you just need a little self-control.

Being overweight isn’t a character flaw. The idea that you can control your weight with willpower is actually how you get fat and why you stay that way.

Here’s how that works.

You don’t need any willpower to eat whatever you like whenever you feel like it. But just try not eating whatever’s in front of you when you get hungry enough.

So willpower only matters when you’re really hungry.

Now look at the popular diets on TV and in the magazines. They’re mostly telling you the same thing: Don’t eat anything you like. And while you’re at it, don’t eat much of anything else, either.

That’s guaranteed to make you hungry. All. The. Time.

But it seems like everyone’s telling you that’s what you have to do if you want to lose weight. So you try it. And it works … for a little while, anyway. 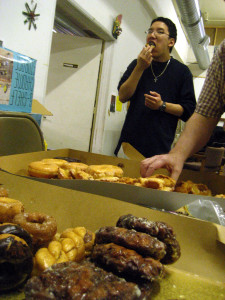 Then you hit a plateau, and it’s been two, three, maybe even four weeks since the last time you lost any weight. Then just when you’re starting to wonder why you’re putting yourself through all this, you show up at a meeting and someone brought bagels and donuts and you lose all control.

If that sounds familiar, the thing you need to understand is that nine out of ten people who go on a diet to lose weight eventually go off that diet. And when they do, they usually gain back all the weight they lost, if not more. So dieting is usually just a way to put off being fat until later instead of right now.

So why do we keep doing it?

Because we start dieting in public but give up all alone. Let me explain what that means.

If someone were giving out directions for how to get to the hospital, and nine out of ten people who followed those directions ended up at the library instead, they’d all see each-other in the parking lot and realize, “Those directions suck. That guy doesn’t know what he’s talking about.”

Then they’d ask somebody else. And if they got the same directions, they’d keep asking until they found somebody with different directions.

But when you go head-first into the donut tray, you don’t see a bunch of people looking back at you wondering how they ended up with glaze all over their faces just like you, so you think you’re the only one. That you’re a failure. That if you just tried harder you could make dieting work.

And you know it. And if you ask your friends who’ve tried every diet that comes along and it’s always failed, they know it too.

So maybe, instead of listening to another so-called expert telling you to just try harder to follow the same old directions that have never gotten you where you want to go … maybe it’s time to go a different direction instead.