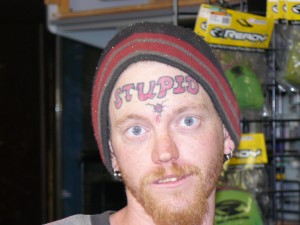 Scientists and academics have a special way of talking to each other. It’s stuffy and formal and … okay, it’s a bit pretentious. Apparently it’s not nice to call each other “stupid” in front of normal people like you and me.

But when you speak fluent sarcasm, you can still point to the stupidity in a way that’s pretty hard to miss. Like the following letter from Tom Naughton to a diabetes researcher with an inflated sense of self-importance.

Tom made the documentary Fathead: You’ve been fed a load of bologna

in response to Morgan Spurlock’s Super Size Me

. Tom showed that you can actually lose weight on an all-fast-food diet … as long as you leave out the fries, soda, and (usually) the bun.

What Tom noticed about Super Size Me was that the math — how many calories Spurlock said he was eating per day — didn’t add up. And neither did the science which, as Tom points out on his site, supports low-carb eating as the solution to obesity and diabetes.

What makes you an “expert”?

At his site, Tom regularly tears apart not just bad reporting on claims from diet researchers, but bad science in the claims themselves. His latest article is a response to advice in a Diabetes Health article.

The author, who you would think should understand how carbs raise blood sugar, was recommending that people with diabetes eat mostly carbs. Maybe she doesn’t understand that elevated blood sugar leads to blindness, impotence, kidney failure, amputated limbs and early death.

Lots of people have said they submitted comments on the article and they never appeared. Tom decided to email the author directly and give her an opportunity to respond.

How to say “F*Â©k you” politely

Here, then, is Tom’s letter to the author.

Iâ€™ve been following your responses to people who questioned your advice to diabetics to consume a high-carbohydrate diet.  Those responses boil down to two arguments:

2.  Show me the long-term clinical studies proving carbohydrate restriction is effective for diabetics, or shut up and leave me alone.

Appealing to the authority of the USDA â€” whose mission is to sell the grains our government subsidizes â€” isnâ€™t proof of anything.  As you may already know, one member of the committee that wrote those guidelines has already stated publicly that the guidelines arenâ€™t based on good science.  I read the entire, mind-numbingly dense, stupefying, often-contradictory report myself, and I agree:  the guidelines arenâ€™t based on anything resembling solid science.  So letâ€™s set those aside and deal with actual science.

Here are links to just a few of the clinical studies that demonstrated the effectiveness of low-carbohydrate diets for managing diabetes:

The effect of a low-carbohydrate, ketogenic diet versus a low-glycemic index diet on glycemic control in type 2 diabetes mellitus

The Low-Carbohydrate Ketogenic Diet improved glycemic control in patients with type 2 diabetes such that diabetes medications were discontinued or reduced in most participants. Because the LCKD can be very effective at lowering blood glucose, patients on diabetes medication who use this diet should be under close medical supervision or capable of adjusting their medication.

Compared to baseline diet, after 8 weeks of a 25% carbohydrate diet, subjects showed significantly improved glycemia as evidenced by fasting blood glucose values (p<0.005) and hemoglobin A1c levels (p<0.05). Those previously treated with oral hypoglycemic agents showed, in addition, a significant decrease in weight and diastolic blood pressure despite the discontinuation of the oral agent. When then placed on a 55% carbohydrate diet, the hemoglobin A1c rose significantly over the ensuing next 12 weeks (p<0.05).

Yes, I know:  you asked for long-term studies.  As far as I can tell from my online research, there are few if any controlled clinical studies of dietary interventions that have lasted more than a year or perhaps two at most.  So you appear to be asking your critics to quote the results of studies that have never been conducted.

But Iâ€™m clearly mistaken about that.  You obviously have access to a long list of multi-year clinical studies on carbohydrate-restricted diets.  I know this because of what you wrote in your article in Diabetes Health:

Since youâ€™ve examined countless such studies, could you please provide me a list of, say, a dozen references to clinical studies in which subjects adhered to a carbohydrate-restricted diet for more than a year, but failed to achieve improved glucose control compared to a control group?  If you could point me to studies matching that description that lasted five or ten years, that would be super.  Iâ€™d like to share them with my readers.  Then weâ€™ll all understand exactly how countless studies failed to show any long-term superiority of carbohydrate restriction for glucose control.

Also, given that you donâ€™t like anyone to promote dietary advice that isnâ€™t backed up by long-term clinical studies, could you please provide a list of multi-year clinical studies in which a diet of 45-65% carbohydrates produced superior glucose control and lower A1c when compared to a control group, or â€“ better yet â€“ when compared to a group in which carbohydrate was restricted to less than 40%?  The diabetics among my readership especially would love to see the scientific basis for your advice â€” after all, their lives depend on it.

I’m looking forward to Ms. Warshaw’s response. But I won’t be holding my breath.