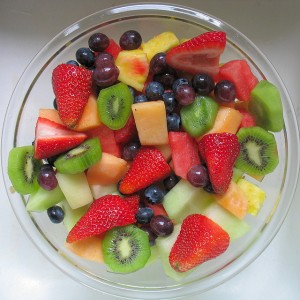 Everyone knows we should all eat plenty of fruits and vegetables. Just like a hundred years ago everyone knew smoking was good for you.

Hold on, am I saying fruits and vegetables are bad for you? Not exactly. What I’m saying is …

Let me start off by saying I’m not talking about the technical definition of what is a fruit, vegetable or legume:

Just about everything is a fruit, unless of course, it’s a vegetable or a legume.

I’m talking about the common usage here in the U.S. Fruits are the seed-bearing part of a plant, vegetables are all the other parts — root, leaf and stem. Well, that’s the common usage when people are “being technical”. What people really mean is:

The reason fruits — or at least the things we call fruits — are sweet is that they’re full of sugar. Vegetables have some sugar, but lots of the carbs in veggies are in the form of fiber.

Botanically there’s not a huge distinction, but we’re not talking about botany, we’re talking about food. And when it comes to eating, like most things in life it’s not about right vs. wrong, it’s about better and worse.

Yeah, better for what is the real question here. Joseph asked:

When you talk about eating no sugars during the week, you specifically mention fruit juices. Are you including whole fruits in this as well? Are those sorts of sugars things to be avoided during these days?

So here are the guidelines:

Fruit is seasonal — eat it that way

Any fruit you eat will be best when it’s in season. Which means you aren’t going to get good strawberries in Cleveland in January. Sorry, there aren’t any.

The only way you get berries around here in mid-winter is to truck it in from thousands of miles away. And that means they were picked before they were ripe. The only thing you’ll taste is the sugar.

UPDATE: Reader hitssquad left a comment explaining: “Berries, citrus, cherries, dates, and grapes are all considered non-climacteric fruits. This means that once they are picked, they will not ripen any further, because the parent tree provides the ripening agents and sugars that sweeten them.” So unlike bananas and tomatoes, which are gassed in transit to artificially ripen them, berries and citrus stop ripening once they are picked.

So check out your local farmers market. And buy something you’ve never eaten before. You just might like it.