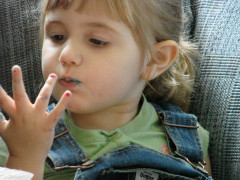 A father of two small boys posted a story about teaching his kids patience. The older one, he asked whether he would rather have one cookie now or two cookies later.

He immediately responded, “Two cookies later.” I asked, “Why?” He said, “Because two is more than one.”

He later asked the older one to teach the younger one how to be patient. He asked his brother the “two cookies” question.

Without missing a beat, J said, “One cookie now.” (But he stopped crying!)

Some of us are like the older son. We see the goal, make a decision, and the one cookie now is out-of-mind.

Some of us are the younger son. We want the goal, but that one cookie sitting there looks really good.

Which one are you?

If you’re like the younger son, you’ve probably spent your life beating yourself up for your lack of self-control. You’ve heard from parents, teachers, bosses and coaches that you need to stay focused if you want to succeed, but there’s always something shiny just off to the side.

“Just have more willpower” is not the answer. You can’t just invent willpower. You have to find something you want now more than you want the cookie now. Or you have to make the cookie not an option.

I’ve always wanted the cookie now. That’s why at 43 years old I was 70 pounds overweight. I wanted that beach body in June, but in the middle of February I wanted the mashed potatoes and gravy right now.

Stop trying to be a different person than who you are. If you aren’t good with long-term goals, stop relying on them. Find short-term goals that you can live with, that point in the direction of your long-term goals.

First it was high carbs to lose weight, then low carbs. But then these â€˜food expertsâ€™ told us high protein is the way to go, no itâ€™s supposed to be low protein. Itâ€™s become confusing and downright depressing.
Fiona McAuliffe